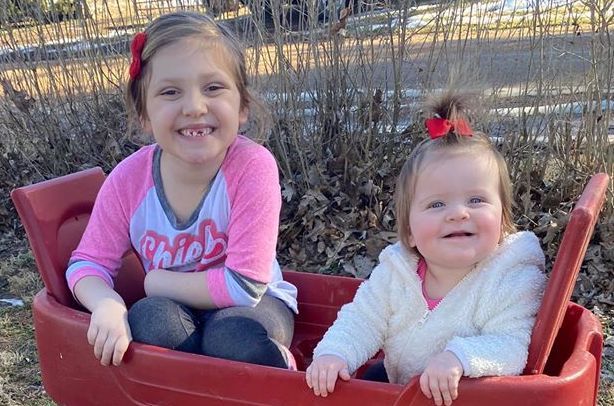 With the recent surge of social media posts and print media articles related to the growing popularity of toy libraries lately, it’s gotten me to thinking….why now. I mean really…now… of all times. As consumerism hurls itself at breakneck speed from one new cool kid thing to the next and the toy isles in most retail stores are being pumped full of literally billions of new toys a year, why the interest now?

I mean I completely understand the fantastic economic and environmental benefits of toy libraries but that doesn’t seem to be the new draw. This groundswell of interest is different. This new obsession of interest feels almost sentimental in nature. And then one day last week while I was having a snow storm induced play date with my Granddaughters, Harper (6 years old) and Mavis (11 months), it struck me.

As I sat and watched them play and while I played with them…what they really seemed to gravitate towards was my ridiculous collection of old, well-worn, toys and odds and ends. I have a slight propensity to hang on to things that I might find a use for later. I mean- I’m not a full on hoarder but I am that person who struggles with throwing things away. If whatever it is still seems to have some life left in it…I’ll find a place to stash it away.

So there I am sitting in the middle of my living room floor with Mavis surrounded by one new thing-a-ma-jig after another that had lights and sounds and played different songs for each button she would push or toggle she pulled or ball she dropped. And none of it was keeping her attention. Frankly it was kind of making her mad. What had grabbed her attention was an unassuming pink plastic Easter egg lying about five feet from her. You see, Harper was playing Barbie’s (circa 1990’s Barbie’s with very little hair, outdated clothing and accessories) at the other end of the living room.

In our home Barbie shoes and accessories are mated and stored in old plastic Easter eggs. This serves two purposes. First, I didn’t have to spend the entirety of my early parenting years with my daughter searching for Barbie shoes and second, I got to save the plastic eggs after Easter. Mavis crawled quickly to the egg and grabbed it up. She pushed herself up to a sitting position and inspected the egg for several minutes. She rolled it around and around in her hand and even put it in her mouth…I’m assuming to see if it might be food.

After a few minutes she noticed Harper could squeeze the eggs she had and they would pop open. Mavis squeezed hers and to her absolute delight the egg popped open. She flashed both Harper and me the proudest smile of accomplishment. Harper noticed her excitement too so as she would take the shoes out of the eggs, she would close them back up and throw them to Mavis. Mavis would retrieve the eggs pop them open and then try oh so hard to put them back together.

This game, if you could call it that, went on for almost an hour. We even started putting raisins in Mavis’s eggs so she would have something safe to find when the eggs popped open for her. It was glorious. We were having the best time just playing. And that’s when it hit me. That’s what toy libraries have right. That’s what First Chance for Children’s toy library, Lend & Learn, has right.

We were playing. Mavis wasn’t putting a ball in a slot to get a light to come on and a bell to ring. Harper wasn’t watching a Barbie video on a tablet or interacting with a laptop game to change Barbie’s shoes with the swipe of a finger. They were PLAYING…I was playing. We had used the toys we had to create a unique and meaningful exchange between the three of us. I think that is what people are looking for and what they are finding now at toy libraries. I think we have become exhausted by toys and games that tell us what to do and how to achieve a winning outcome. I think we have become exhausted by the countless power cords, chargers and batteries we need. I think the noise and the buzz and the lights have drained us. I think we are all just longing to play.

I hope if you’re longing to play, you’ll come join us at Lend & Learn too.